"The vision is very good, but it is not so easy to build a car. Regardless of whether Jia Yueting can survive the current crisis, at least LeTV has given a warning to the 'barbarians' who entered the automotive industry." After the suspension of production, the traditional automobile companies The answers obtained by the executives are almost identical, and the problems facing LeTV are more serious than they think. 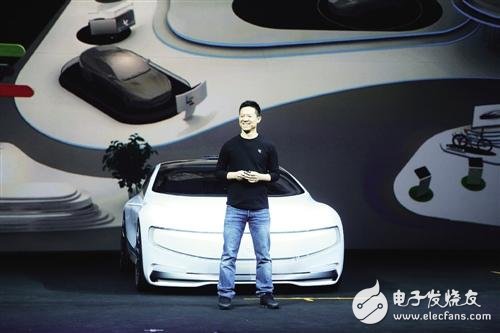 Capital, technology, talent, user psychology, etc., although connected companies have strong resource integration capabilities, but unlike the mobile phone industry, automotive products with more than 20,000 parts and components, it is difficult to succeed without accumulation.

However, a senior executive of Weilai Automobile said to the 21st Century Business Herald on December 3rd: "Enterprises with Internet background can solve many fundamental problems in the traditional automobile industry."

At the same time, LeTV also triggered the collective enthusiasm of the Internet background enterprise to build a car. Like LeTV, including Weilai Auto, Weimar, Harmony Futeng, etc., a group of emerging auto companies almost invariably â€œbreak intoâ€ with a new model. The automotive industry, with the "new energy + smart Internet + sharing" model, to create a new way of travel, hope that Apple, Huawei to subvert Nokia, become the winner of the future automotive market.

However, recently in the focus on the US market, LeTV's start-up, high-end electric vehicle manufacturer Faraday Future (FF) in Nevada was questioned for production suspension.

LeTV's US Super Factory is known as the world's first eco-car super factory. The first phase of the plant will invest 6 billion yuan and the annual production capacity will be 200,000 vehicles. The second phase is planned to start construction within two years after the first phase of production, and the production capacity will be 200,000 vehicles. The project will invest 6 billion yuan. The business parks supporting the park mainly include administrative office areas and supporting facilities construction, with an investment of 2 billion yuan.

However, since then, LeTV has issued a notice stating that the Moganshan project in Zhejiang is progressing smoothly and will start construction before the end of the year. The Tianjin Jixian project has already signed a letter of intent for cooperation with the local government. The relevant work requires further consultation between the two parties.

Jia Yueting also said in an open letter that LeTV is indeed facing financial difficulties. The company will then bid farewell to the expansion of the money-burning model and focus on the existing ecology.

Jia Yueting did not know the investment in making a car. He had some preparations in the early stage. In fact, just when Ding Lei joined LeTV in September last year, people close to LeTV had revealed to reporters that the reason why Ding Lei chose LeTV is that they are more ambitious, more invested, and burdened than traditional car companies. Light, these are not available to traditional car companies to do Internet cars.

"Although traditional cars are also doing Internet cars, most of them are investing more than one billion, and such a scale is difficult to grow." The above-mentioned people believe that the main reason is that traditional car companies are hard to be far away. Dream, to stir the existing vested interests.

There are at least two reasons: First, the traditional car companies invest heavily in Internet cars, which will affect the existing profits. Second, the basic consensus reached by Internet car companies is that the future car operation mode must be shared by the time-sharing model. This also means that once a person buys a car, after sharing, an average of three or four people, and even more people, only need one car.

This compression of market size is the traditional car companies are not willing to take the initiative to promote. That is to say, for auto executives, if they do not build future smart cars in Internet companies, they are likely to be limited in development.

â€œIt should be said that LeTVâ€™s capital chain tension is mainly affected by two reasons: First, the investment in the automotive industry has greatly exceeded LeTVâ€™s expectations; second, the financing method adopted by LeTV is not applicable to the automotive industry.â€ An unnamed Traditional car executives said in an interview.

Internet cars are also cars, and they need a platform for building cars. Only one platform can be built without billions of dollars. Moreover, the investment in the car is large and the time is long. For example, the car has invested more than 15 billion yuan in seven years. The same is true for Internet-made cars. In fact, although the plan is high-profile, there are not many companies that have come out of the Internet. In October of this year, Jia Yueting originally planned to drive LeSee to participate in the LeTV San Francisco conference, but the car did not appear, but a "car accident" on the way to Los Angeles in San Francisco.

â€œFor auto companies, the cost of a production car and a concept car on a stand is completely different,â€ said the executive.

In addition, there is a source of funds, the automotive industry is a long-term investment, investors are more concerned about long-term interests, rather than short-term behavior. However, LeTVâ€™s approach to financing through listed companies attracts short-term investors. This means that LeTV needs to constantly create themes to attract investors, and when there is a crisis in LeTV, investors may immediately clear the position, which is the main reason for the instability of LeEco's capital chain.

The window period is only three or four years.

"LeTV is not impossible to succeed. If you can survive the crisis of the capital chain, there is still the possibility of success. It is still too early to judge." Many car executives interviewed expressed similar views.

However, executives from emerging auto companies told reporters: "We also don't want to confuse with LeTV. Because LeTV's crisis is just a matter of music, it is not the logic of the Internet background companies to make cars."

Car companies with Internet backgrounds pay more attention to customer experience. As long as you can give the user a good experience, whether it is to buy a car or not to buy a car, the final left, must be the best mode of user experience.

Since emerging companies with Internet backgrounds are not affected by traditional businesses, they can be used in a completely new way around the user experience.

However, in this regard, the executives of traditional car companies generally have reservations. â€œThe car itself is very complicated. The small batch is different from the mass production. It is easy to build a car, but it is different when it is really on the road.â€

For example, the dynamic performance of a car can reach the speed of a sports car, but maybe the tire can not withstand it, and these will eventually integrate and integrate to form a comprehensive capability, which not only requires resources but also takes time, which is why the automobile companies in the Internet background in recent years are mostly thunder. The rain was small, although there was no shortage of launch cars, but there was no over-production.

â€œI believe that there will be success in these emerging companies, but traditional car companies are also transforming,â€ said a management person at SAIC. In fact, in the automotive industry, a large-scale transformation from the international giants such as Volkswagen and General Motors to the participation of independent brands such as SAIC, FAW, and GAC is underway, while traditional car companies are holding hands with Internet car companies to create more The model of a good customer experience is also in full swing.

"Compared with the Internet background of the car manufacturers, the 'car + Internet' model is more practical and efficient." The above-mentioned people believe that, from the current situation, the transformation products of traditional car companies will be concentrated in three or four years. break out. This also means that for these emerging companies, if they can't quickly bring products to market and make breakthroughs, the challenges of the three- or four-year window will be even greater.

The physical structure of L. SYV is 100% polyethylene insulation; Sywv# for physical foam polyethylene insulated cable, foaming rate of 70-80%; L. Due to the dielectric loss, the attenuation of SYV solid cable is significantly greater than that of SYWV physical foam cable; Among the commonly used engineering cables, the physical foam cable is still the best transmission performance, the lowest price of the cable, in video, radio frequency, microwave and other bands are so. The test data given by the manufacturer also shows this; L) Library coaxial cable can be used for DC, RF and microwave frequency bands. Differentiating cables by "RF"/" video "is not only insufficient, but also misleading: it seems that solid cables must or can only be selected for video transmission. ; From an engineering perspective, it is more practical to distinguish between "solid" and "foam" cable types; L The characteristic difference between high braided (128) and low braided (64) cables: Yi Aiyi laboratory experimental research shows that in the following frequency band of 200 KHZ, the "low resistance" of high braided cables plays an important role in the shielding layer, so the low frequency transmission attenuation is less than that of low braided cables. However, in the video, RF and microwave frequencies above 200-300 KHZ, the high braided cable has lost the advantage of "low resistance" due to the "high frequency skin effect", so the two high frequency attenuation cables are basically the same.